Finally after weeks of great political tension, Catalonian government has  declared independence and Spain of course has revoked article 155 for the first time in the history of Spain, which will dissolve Catalonia’s current government. Elections will happen in the next six months. Untill then Catalonia will remain under direct rule from Madrid. One has to accept that the future of Spain and Catalonia looks uncertain and gloomy. Though one thing is quite certain, that we should expect more protest and political mess in Catalonia. So why is it happening and what impact it can have on the world, here is a quick report on that.

Catalonia is a large Spanish province located on the eastern extremity of the Iberian peninsula. It consists of four provinces: Barcelona, Girona, Lleida and Tarragona. It is bordered by France and Pandora to the north and Mediterranean sea to the east and the autonomous communities of Aragon to the west and Valencia to the south. Its official languages are Spanish, Aranese dialect of Occitan and Catalan. It has a flag of its own known as the Estelada flag.

Catalonia’s bid for independence is a mixture of a complex history, diverse cultures and messy economic conditions(Especially since the 2008’s great recession). Albeit of this they have more in common than they’d like to admit. They share a complex history which dates back to more than a thousand years ago.

It is not for the first time that Catalonia’s are demanding their independence. Its struggle for it has a history of it’s own. The first major protest of 20th century began in 1922, when Francesco Catalã (Catalan state) party, which then merged with others to form the Esquerra Republicans de Catalunya(republic left of the Catalonia). It later won the elections in 1931, the election which also forced Alfonso thirteenth to go into exile. Macia, then escalated his demand for the Catalan State of Federal Spanish Republic. But talks with the leader of second Spanish republic made him accept autonomy for Catalonia within the Spanish state.

Despite of this, the Catalan enjoyed this hard earned autonomy for only seven years, as General Franco, the victor of Spanish civil war abolished their autonomy.in 1938. General Franco’s regime openly took repressive measures to curb any political dissent. Catalonia somehow endured his long, 37 years regime. After his death Spain became a democracy and Catalonia regained its autonomy. From 1975 Spain and Catalonia enjoyed a peaceful and prosperous era. Catalonia became one of the most economically important regions of Spain.

The protest for liberation erupted again in 2006, when a Spanish court ruled that some of the articles of statue of autonomy were unconstitutional. This judgement took Catalonia by storm. Starting with Arenys de munt over 550 municipalities held referendums on independence, most of which returned with a high yes with turnouts being around fifty percent. But the event which caught the world’s attention was a mass protest held in Barcelona on 10 July 2010.

It was organized by the cultural organization Omnium Cultural to voice their concerns over high court’s order. A large number of people turned out for this demonstration. Some estimated that the turnout was around 1.1 million to 1.5 million. However the Madrid based newspaper El Pause thought it to be 425,000. It generated a wave of political consciousness among Catalonia’s youth. After this on 11 September 2012, there was another mass protest to ask the government to begin the process towards independence. As a result of increasing public pressure the then Catalonian president Artur Moss called a snap election.

In the 2013 election, the pro independence parties won a majority, a first in Catalonia’s long history. The new Parliament adopted the Catalan sovereignty decleration in 2013, asserting that Catalonian people have the right to decide their own future. The newly formed government then announced a referendum on independence. The Spanish government felt the referendum was illegal. The pressure from Madrid forced the Catalonian government to change the referendum from a binding one to a non binding one. Albeit of this a Spanish court banned it. The referendum still took place. Two questions were asked in that referendum. The first was if the voter wanted Catalonia to be a state. The second asked if yes, then should it be independent or not. The result showed that 81 percent voters voted yes-yes in a turnout of around 42 percent.

Well, you may think most Catalans are in favour of secession, but this is not the case. Most who wanted to stay didn’t turn up to vote. Moss then called a general election. The pro independence parties fell just short of majority. The newly formed Parliament passed a resolution declaring the start of independence process. As a part of this process president Puigdenmont organized a referendum on whether Catalans want independence or not. The Spanish government termed it illegal. The Spanish government used harsh measures to prevent the vote from happening.

The government banned every material related to voting. The Spanish authorities regularly checked public places which could have become polling booth. Some videos showing Spanish police brutally beating peaceful voters have circulated all over the Internet(although the Spanish government believes them to be fake).

Is the situation really so bad?

The main reason for which Catalans want independence is the difference between Spanish and Catalonian culture and language. Of course there is a history which no one can erase. Yet no can forget what they have gained together. Many still can’t think about  Spain without Catalonia. Yes, Catalans can say they were not treated properly in the past by Spain and are contributing muchore to Spanish economy than they are getting in return. Despite of all this try comparing this situation to the situation of Kurdistan or Palestine. The situation is actually a bit like Scotland and United Kingdom or like United Kingdom and European Union. Though the arrests of Catalonian leaders are alarming. Perhaps the Spanish government can handle the issue a bit more lightly to ease the tension between Spain and Catalonia. 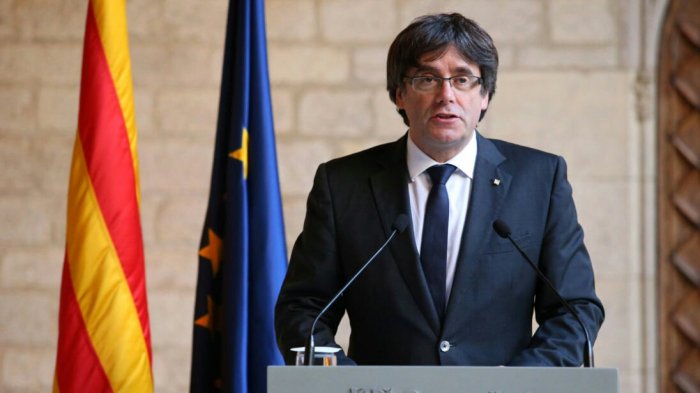 The chance of a secession looks very bleak in the near future. The most probable option is that the Spanish government would reinstate the statue of autonomy or will negotiate a better economic deal for Catalonia to calm down the tensions. Nevertheless, one thing will happen certainly. This movement will inspire many others to demand independence from one’s nation, particularly in Europe. Such protests have already started in parts of Italy. Though, it is highly unlikely that any such protest would be fruitful.

5 thoughts on “‘A beginner’s guide to Catalonian independence movement’”

This is a text widget. The Text Widget allows you to add text or HTML to your sidebar. You can use a text widget to display text, links, images, HTML, or a combination of these. Edit them in the Widget section of the Customizer.